Gabriela and the Widow

We've been featuring Jack Remick's wonderfully magical novel, Gabriela and the Widow in a few posts on this blog recently, and now here is my review. 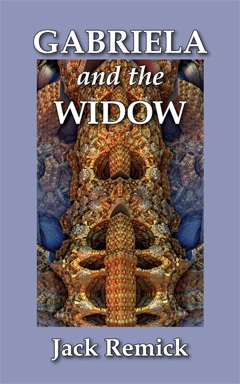 As is already apparent, I enjoyed this book immensely, if for no other reason that it was purely original. Here is a man writing in the voice of not one, but two women: one at the end of her life, the other just beginning it, after a false start. In a way, the elderly woman is giving a kind of birth to the younger, healing her, teaching her, and becoming her/merging with her at all once - but over time.

Gabriela is a young Mixteca woman with an ugly past. Raped by soldiers who destroy her small Mexican village, she eventually becomes the "wife" of a brutal man who only wants her to bear children, and when Gabriela doesn't produce, he punishes her. She escapes north to California, but to what? All she really knows is pain and suffering. But she has a kind of stoic grace, an innate intelligence, that shines through her flat-chested, wide-hipped lack of conventional beauty and breeding.

She finally is offered a job caring for the aging Viuda, widow, by the widow's daughter who cannot be bothered by the old woman's demands, schedule, and peculiarities - such as having her finger and toenails clipped and then saved in specially marked envelopes.

La Viuda wants to create a List. Not just any list, but a list of all those things that comprise her life. She wants to remember all its events, the details, and have them transcribed to not a history, or a narrative, but a list. The List is its own way similar to the envelopes containing La Viuda's hair and nail clippings: they are the bits and pieces of a person, not the whole person, but the little remnants that, taken together, finally add up to a new woman: the product of Gabriela and the Widow coming together to form a new, stronger, better, more beautiful woman.

The Widow is many of the things that Gabriela is not: experienced, sexually powerful in her youth, wise in the ways of the world, and wealthy. Gabriela is those things that the Widow is not: young, innocent, damaged, and powerless. As Gabriela grows in grace, and beauty, and eventually, sexual maturity, The Widow serves as her mentor, her inquisitor, her priestess, her midwife as she is brought into a new life, even as The Widow is slowly exiting hers.

It's a beautiful story. It is not a "page-turner," or a story meant to be downed at a gulp. It is meant to be sipped and savored; held in the mouth and tasted to absorb the full bouquet of the words and thoughts and emotions.

I was, I admit, somewhat astounded that a man could write with such insight into the private thoughts of women, particularly about their bodies and how it feels to be in a woman's body - especially as she comes of age physically. However he accomplished this, he was successful, and we are brought into the worlds of the maiden, mother, and crone, as we see Woman in all her aspects through the story of these two mysterious women, who come together to begin a new life - the one that we finally come to believe Gabriela will experience, even as she finds a young girl to become her handmaiden as the book concludes.
Email Post

Jack said…
Hello Nancy: Thank you for this insightful and probing review of Gabriela and The Widow. As the writer of this novel, I enjoyed your words: "It is meant to be sipped and savored; held in the mouth and tasted to absorb the full bouquet of the words and thoughts and emotions."
Thank you for taking the time to slow down in the rush-rush of the computer age. Jack Remick
1:56 PM

Virginia S Grenier said…
Thank you Nancy for such a wonderful review and for hosting Jack during his virtual tour. I am so glad you enjoyed the book. I'm reading it a second time because there is so much to take in and as you said...you need to savory it.
10:45 AM

Magic Carpet of 16x Books said…
Nancy, I have seen Jack's book promoted all over the web, but your review really caught my attention - made me want to read it.

Where can I buy Gabriel and the Widow. A wonderful review like this needs to include at least one link to where it can be purchased. BUY while the "urge" is HOT - that's my take on such a review.

Seems as if congrats are in order, Jack. YEA!!

I am also pinning this review on my Pinterest "Book Review" board.

Nancy Roberts said…
This comment has been removed by the author.
3:24 PM

Nancy Roberts said…
Margot, you are absolutely right... you can find Jack's book on Amazon, or try: http://www.worldofinknetwork.com/

Writers Are People, Too

In Search of Jamie Fraser